André Leon Talley, the larger-than-life fashion journalist who worked his way into the hearts of countless steely designers and nonplused industry veterans – died on Tuesday in White Plains, N.Y. He was 73 years old. Talley started his iconic 40-year career when he joined Andy Warhol's Interview Magazine in 1975. He went on to join Vogue in 1983 and was elevated to creative director in 1988.

"I never realized until now how much presence André had in my heart," said Diane Von Furstenberg. "André was a visionary, an artist and a lover of life. He was the most elegant person I met, the most delicate loyal friend and worshipped beauty in every form. We knew each other at every step of our adult lives and we grew together. We were strict and demanding on each other but we always knew we could count on each other when needed. Today I realize he is gone and there is a huge void inside me."

"I've known him longer than most people," said fashion journalist and book author Teri Agins. "I met André in 1977. I had just graduated from journalism school. He was the European editor at WWD, and I was in the Chicago bureau. I remember seeing him for the first time, and I remember telling people he was a real genius. Rereading [the] stories, they didn't sound as delicious as they did back then.

"He was steeped in the culture of fashion and came out with all these stories on Saint Laurent, etc. André had a huge expense account but I think they gave him a lot of tether," Agins said. "They had no one else to do those stories. You knew you were going to get a really fulsome story from him."

Talley was raised by his grandmother in Durham, North Carolina, an unlikely place for someone intensely passionate about fashion to grow up. He was one of the few Black editors on the lily-white masthead of Vogue, where he was the right hand and confidante of the mercurial then-Vogue editor-in-chief Anna Wintour. In his memoir, the "Chiffon Trenches," he divulged details of their relationship, writing that although their relationship became strained in later years, the book was something of a "love letter" to Wintour.

A drama queen, if ever there was one, Talley was an imposing 6 feet 6 inches tall and was not thin, especially in his later years when he developed health issues. "He was in poor health, as most people know," said Agins. "He wore those robes because he was a very heavyset man. You could go to a fashion show, and he was in a wheelchair, and I'd seen him lumber to the car afterwards, and it was always an SUV."

Wearing regal white robes when in conversation with Whoopie Goldberg at the Metropolitan Museum of Art's Costume Ball in 2010, Talley appeared like a high priest, seated across from the actress, with a Greek or Roman sculpture wearing a robe looking down over him. 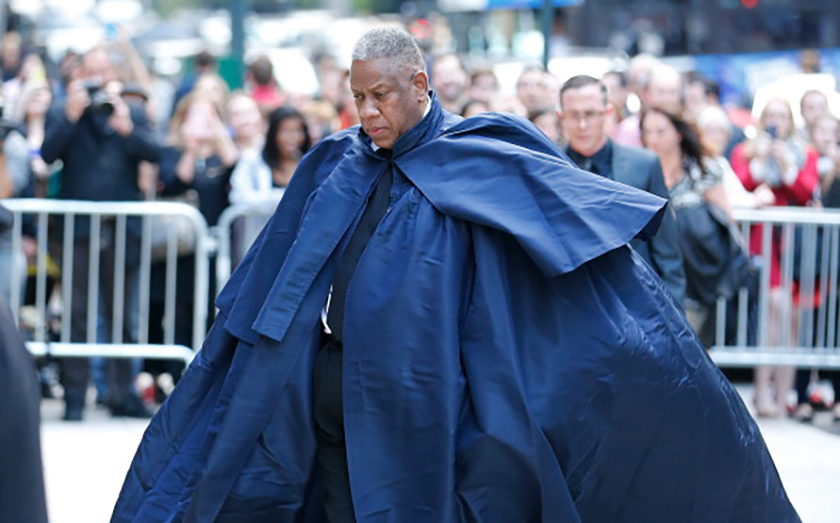 Agins, who met Talley before "he was wearing all those capes," said he was always a "very conservative dresser but always had that flair. He was very grand. I remember going to the office in New York and thinking, 'That's André.' He was very kind to me and when he was in Paris and I was working on my book. That's when I got to spend some time with him. He was staying at the Ritz. He had an apartment at the Paris Ritz, and Karl Lagerfeld was paying for it. I know because he told me."

At the Ritz hotel, Talley would snap his fingers and ask for the check, "Vite vite vite. All those clothes he had. Miuccia Prada made him this red alligator coat. He was a big guy so it required a lot of alligator. He also had this incredible sable muff that he used to carry all the time. I remember him as a journalist and I think he was a really good journalist. André also was very much a snob and that was part of the mystique of fashion."

Talley, who didn't have children, supported young designers and thought of them as his kids, nurturing them. "You think of André as Mr. Saville Row, but he supported Puffy and Sean John.
He went to the Savannah College of Art and Design when Paula Wallace, founder, and president of SCAD, made him a trustee. She named a lifetime achievement award after him, and suddenly André wasn't tethered to Anna Wintour," Agins said. "I asked him to get me an invitation. I wanted to see this up close. The students were gaga over him."

A measure of his pull was the cadre of A-list designers who traveled to Savannah to support Talley and see him receive the accolade. Agins said Vera Wang, Oscar de la Renta, Marc Jacobs, and Tom Ford made the trek. "John Galliano was supposed to come. They did it for André. The students loved him. It was such a wonderful moment for him because he got to nurture young people, and he really did." Toward the end of his life and career, he was working with LaQuan Smith, a young black designer he championed.

"It's pretty remarkable. He can tell you about something Marie Antoinette wore and knew all the French words with that kind of affected accent. I just call it the André accent."