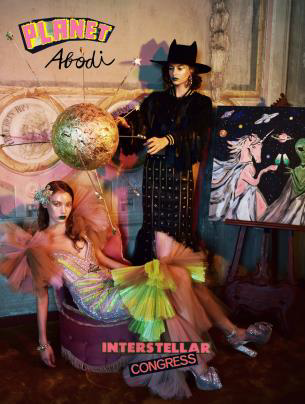 An elaborate collection lavishly imbued with astronomical adventures, ABODI’s spring/summer 2018 “Interstellar Congress” discovers the mysterious undercurrents of prettiness along with an intense level of haute couture craftsmanship. The space-age sartorial line ignites the powers of designing dresses of pure beauty that are infused with a cool and unusual disposition, allowing the designer to deconstruct the classics and transfigure them into contemporary additions.

The designer frequently calls upon an accumulation of references including ufo cults, retro science fiction, the youth of 2000’s and old Hollywood glamour as well as Lynch, Fassbinder, Wes Anderson and Fellini women. These subjects are amalgamated into an innovative form of species who resonate as adventurers, heroes, ageless and curious individuals that journey through time and between dimensions, who subsequently radiate a fresh characterization of independence, freedom, dreams, and fantasy.

“Interstellar Congress” translates as a fantastical spectacle of avant-garde aesthetics, which are visually intoxicating and artisanally exceptional. The collection exudes an exuberant dichotomy of fabrications, colors, and textures that result in unapologetically fabulous, ethereal, sensual and idiosyncratic styles and silhouettes. French dresses rendered with tulle and irregular signature dots, garments artfully reworked and embellished in imaginable ways, Swarovski crystals studded onto ABODI design patches with further accents of ruffles, applications and embroideries collectively contributes to the eclectic array of pieces. 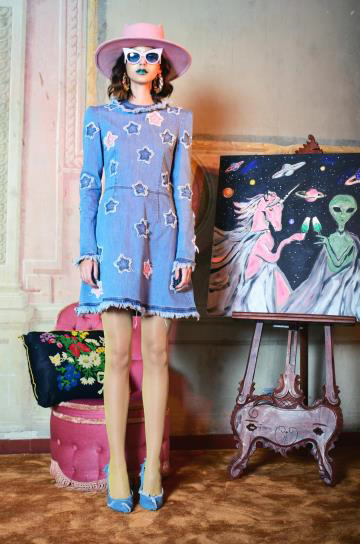 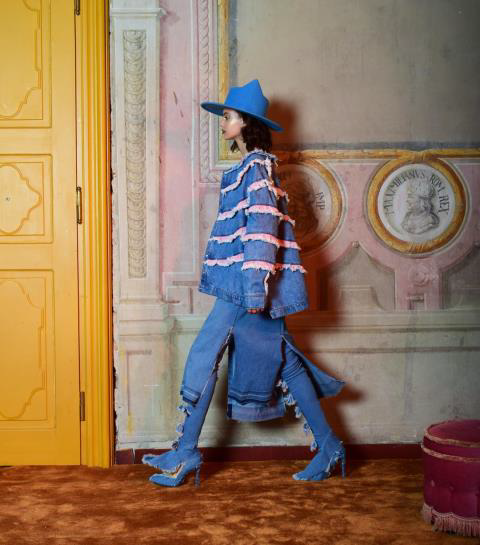 An additional juxtaposition of designs is identified amid the leather and feather goth-esque bomber jackets and the delicate fluffy couture outerwear items. Chiffon dresses that arrive tantalizing and imbued with hand painted botanical prints and an inclusion of denim altogether address a sexy, dress-to-impress aesthetic that attains a must touch deconstructed surface. Silhouette-enhancing dresses – reminiscent of flamenco dancers feature melodramatic helpings of provocative tuffs of tulles, which highlight the shoulders and hemlines and translate into eye-catching standouts.

The electric color palette diversifies from pale shades that include fairytale pink and nudes through to navy blue, black, neon yellow, light greys and stormy blues. Accessories play an integral part in the collection with rose, moon and star shaped neckpieces that arrive golden and crystal in shimmering stacks; oversized earrings; metallic, feathers and floppy bows adorn ABODI’s array of footwear, and not eliminating the series of iconic and trendy ‘BAD CAT’ hats, which emerge in happy baby blue, pastel pink and deep black. 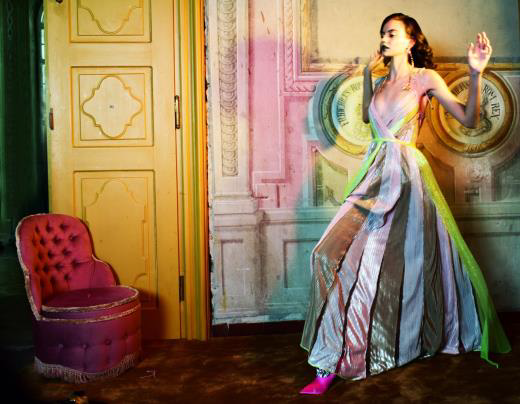 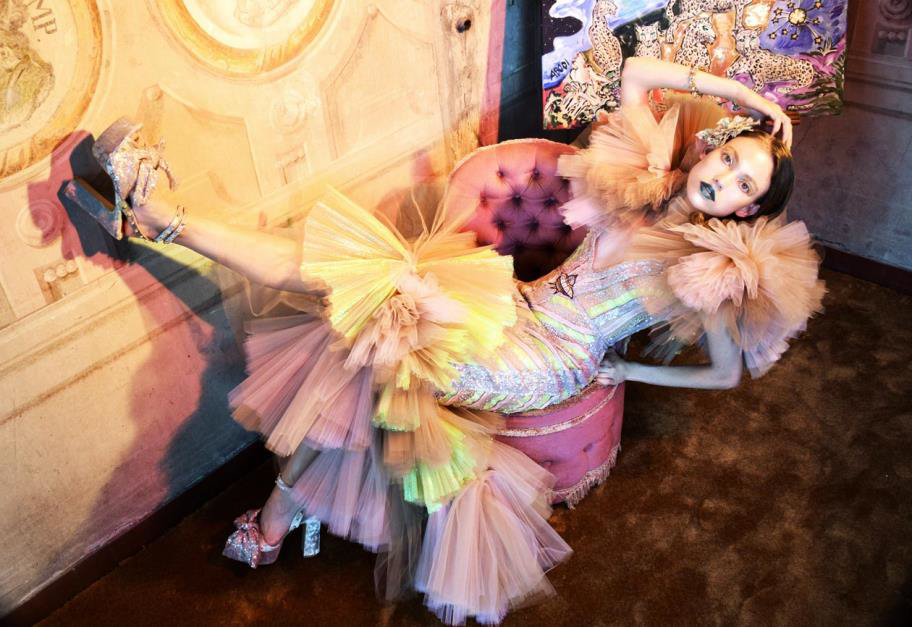 Coming as no surprise, ABODI has accumulated a demanding level of international fashion customers, who champion the brand’s unique creativity and ultra-contemporary style. Carrying a passion for designing painfully beautiful things, baroque futurism translates as ABODI’s signature vision, uniting ancient and futurism, opulence fused with rigid, robotic technology that casts a new religion. TWIN UNISUS is the ABODI icon, a winged unicorn that is a creature who encompasses mystical and powerful qualities. Since the brand established itself in 2013, every collection deciphers a fresh chapter amid the TWIN UNISIS EMPIRE. 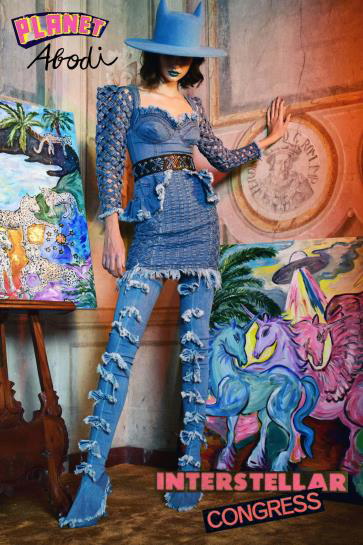 Despite its outlandish and striking fashion-forward persona, the label advocates a conscious ethical value, priding themselves in excluding exotic feathers, materials from an uncontrolled origin and real fur from their collections.

Attaining an army of accolades, being featured in a variety of top industry publications and having a long line of A-list celebrities choose her clothing, Dora Abodi from Transylvania has created a fashion brand whose collections are abundant with character, ostentatiousness and a magical magnetism that captivates each and every time.