Harmony between nature and human beings steals the limelight, the presence of sewn threads and patterns in fabrics linking the two elements. Aside from one's identity in nature, Ryunosuke Okazaki rehashes histories, the retelling of the catastrophe people underwent, and the light they redeemed at the end. Synthesizing all features in every outfit, he masters the art of human, nature, and history storytelling in art and fashion.

The Hiroshima-native thinks of his roots and his disposition as he creates shapes that people can wear. A graduate of Fine Arts from the Tokyo University of Arts, Okazaki aspires to dress the body and human beings, grazing on Japan's 1945 chronicles and peace, and illuminating his add-on perception that one's dress-changing speaks of their spirit and purpose on Earth.

"Hiroshima, my hometown, suffered in the atomic bombings, losing its people and nature. Hundreds of paper cranes with prayers across the world have been sent to Hiroshima with the hopes of not repeating the same incident. The prayers elicit the intimacy between people and nature, the objects of worship," Ryunosuke says. Drawing his influences from the paper cranes' prayers, a classic origami design of a bird thought to deliver souls into paradise, he crafted a fitting dress made of strips of colored paper for his collection Wearing Prayer. At the same time, he sewed zigzag and circular patterns into a long cloth made from recycled paper cranes for Be wounded in prayer. "They bring the world's prayers together for an invisible peace and allow us to feel life," he adds. 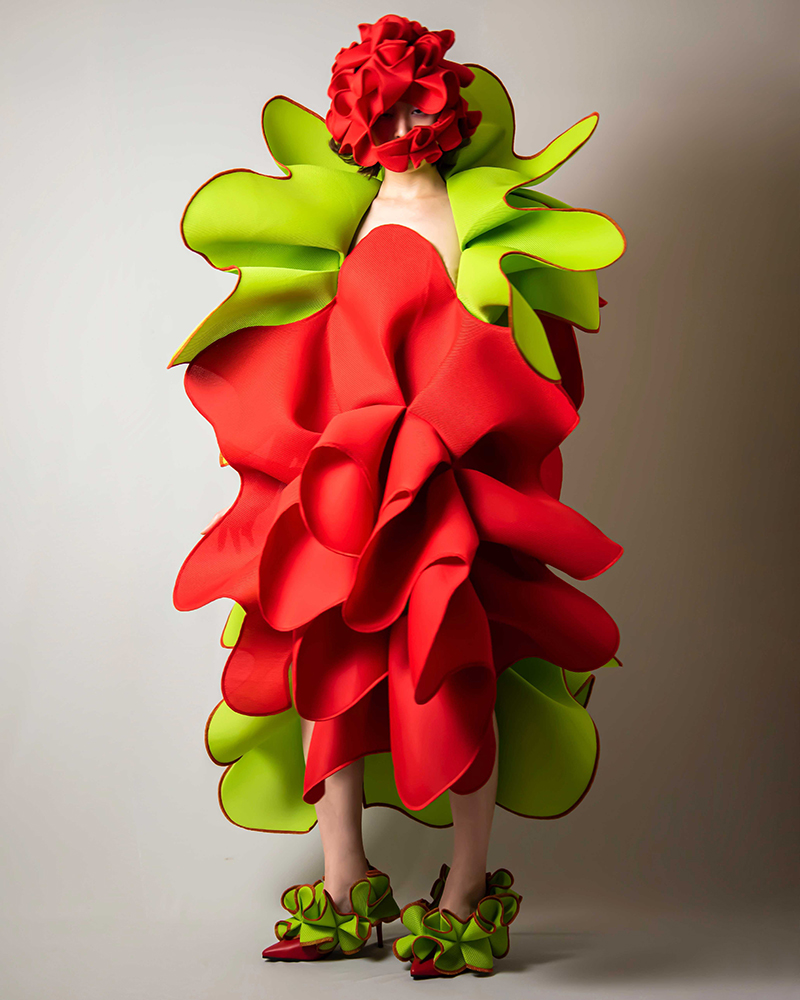 The narrations on Hiroshima, tributes, and passing persevere. The former Bank of Japan in Hiroshima hosted Okazaki’s People seeking peace on August 06, 2018, the commemoration of the A-Bomb Day and Hiroshima Peace Memorial Ceremony. The children in Hiroshima drew images on recycled paper, and Okazaki pieced them together to form clothes that united their inklings. In 2019, his shows in the Tokyo Metropolitan Museum of Art and Geidai Arts in Marunouchi showcased 1945.86.815, his constitution of fashion, archives, and the female body. His interpretation of the female body's torso reveals human diversity and imperfections, the metaphors of fashion with history. "People who were exposed to the atomic bombings were burnt and lined up by the river. I did not see the scene, but when I saw the artefacts left in the Hiroshima Peace Memorial Museum, I thought of the body that was destroyed by the conflict caused by other human beings," says Okazaki.

Apart from dedication to Hiroshima’s history, Okazaki also architects designs that resemble avant-garde nostalgia. In Rose, Pulse, Shell, he adopts red and black as his primary colors, the light chiffon red garment masking the black off-shoulder dress beneath. In Okazaki's words, the beauty of rose emits life, the pulse echoes the heartbeat, and the shell protects oneself and evolves around time. The amalgamation of these three forms a clockwork that functions dependently. In the collection In Memory, he combines light pink mesh-like garments with silver grid draping around the outfit. The wearer's face hides underneath the truffles of pink and red fabrics, Okazaki's portrayal of connecting with people through one's memory.

While beliefs in life and politics seem to permeate his artistry, Okazaki admits to spotlighting more of the relationship between humans and nature. "Human beings have been a part of nature, but it seems to have gotten apart from it both physically and mentally. We are bound to reconsider how to deal with nature, which has gradually faded from humans' mind," Okazaki tells Blanc Magazine. "Also, human history is a collection of personal stories, and my personal history interweaves with the history of human beings. I would continue designing reflections of what I have seen and felt from the environment around me."

Poetry and impermanence in introspection. Not a cadence in stanza, but the seamless flow of fabrics. Not store-window outfits, but details that mold strangeness of beauty. While the orthodox mindset perceives fashion falling under the scope of art or vice-versa, he veers off and communes the two. He infuses his handiworks with narrations of personal and world history. He pays little attention to an observer's thoughts over his creations and more to his devotion to self, stories, and sincerity. He cements his doctrine to journey through commentaries and odes. A poet and a designer, Ryunosuke Okazaki feed his observers with the past and present visions that elicit empathy and memories.